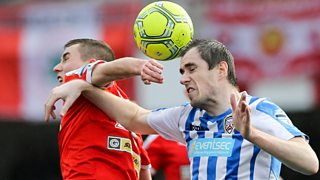 Three players were sent-off as Cliftonville and Coleraine played out a scoreless draw in north Belfast.

Reds pair Paul Finnegan and Jaimie McGovern were red-carded in the second half along with Coleraine's Adam Mullan.

Both sides went close to a breakthrough but it ended all-square and third-placed Cliftonville remain four points clear of the Bannsiders.