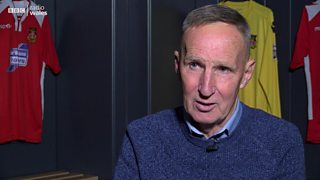 As Gareth Bale goes for his third Champions League, BBC Wales Sport talks to the first Welshman to conquer Europe.

He explains why a famous banner means more to him than his medals and says a Juventus v Real Madrid final was "written in the script" because of the Welsh connections at the two clubs.