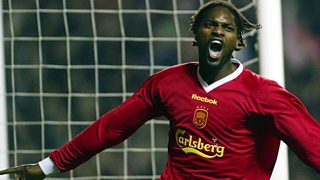 Former footballer Salif Diao has said he was made to feel unwelcome by some senior players when he joined Liverpool in 2002.

Senegal's Diao, who spent five years on the books at Liverpool, said he struggled to settle because of some player's attitudes.

He's been talking to the BBC as part of the Where Are They Now? series, looking at ex-Premier League players from Africa.