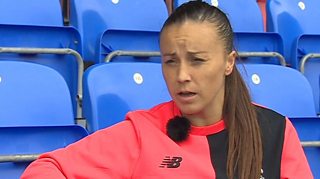 Liverpool striker Natasha Harding says Wales' trip to Portugal, which includes two friendlies, is an ideal opportunity for the squad to get together.

Harding tells Newyddion 9 that two games and further training camps later this summer will be the ideal preparations for the World Cup qualifiers, which begin in September.