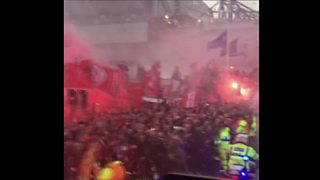 Watch: Inside the Man City team bus at Anfield

Manchester City coach Manuel Estiarte has posted video footage on Instagram from inside the team bus as it arrived at Anfield before their 3-0 defeat by Liverpool in the Champions League quarter-final first leg. The bus was attacked by some fans throwing cans, bottles and flares.

Liverpool have apologised and called the behaviour "completely unacceptable".

No players or staff were injured but two police officers were hurt and the coach was left unsafe to be driven.