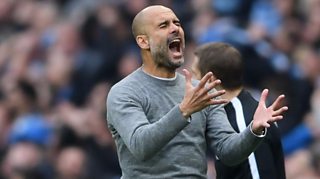 Guardiola hopes Man Utd defeat will not cause 'too much damage'

Pep Guardiola says his Manchester City team played well during their 3-2 defeat by Manchester United, but hopes the defeat will not cause any psychological damage before Tuesday's Champions League quarter-final second leg against Liverpool.

Watch all the highlights from Saturday's fixtures on Match of the Day, 22:30 BST on BBC One and the BBC Sport website & app.