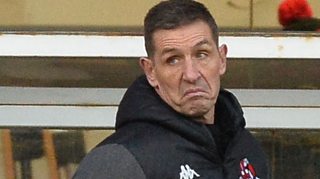 Crusaders boss Stephen Baxter gives a critical assessment of his side's campaign following the failure to defend their league title.

Last season's champions are battling to finish in third place in the Irish Premiership as they switch their focus towards the Irish Cup final against Ballinamallard next month.

"The league campaign just didn't get to where we wanted to get to but we were in the top four most of the season so that was pleasing in some ways," said Baxter.