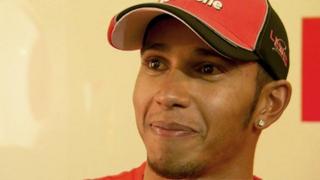 Lewis Hamilton says winning the Abu Dhabi Grand Prix was the perfect end to the weekend and says things "just seemed to go right" at the Yas Marina Circuit.

It was the 26-year-old's first victory in eight races and he admits that he had been suffering from a "negative vibe" that has affected his performances.

Hamilton is joined in the McLaren garage by his mum who is in Abu Dhabi celebrating her birthday, and the McLaren driver admits he needs to surround himself with more friends and family at races.