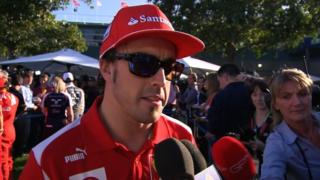 Ferrari drivers Fernando Alonso and Felipe Massa are unhappy with the handling of their new 2012 car after a poor qualifying session for Sunday's Australian Grand Prix.

Alonso spun out in second qualifying and ended up 12th on the grid, while Massa struggled with the handling of his car to finish a lowly 16th.

Massa says he was "fighting a lot" with the car, while Alonso thinks it is a "difficult time for everybody" at Ferrari.