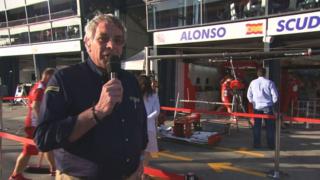 BBC F1 pundits David Coulthard and Gary Anderson analyse why the Ferraris are performing so poorly at the season-opening Australian Grand Prix.

Alonso spun out in second qualifying and ended up 12th on the grid, while Massa struggled with the handling of his car to finish a lowly 16th.

Coulthard says the car appears to have no traction, while Anderson goes as far as saying the team may need to completely redesign the car.