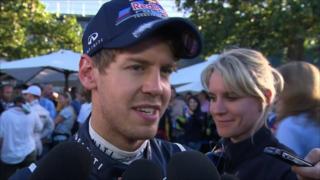 Formula 1's drivers react to the qualifying session for the season-opening Australian Grand Prix, with Sebastian Vettel saying his sixth position is "more or less" what the team expected, with Red Bull team-mate Mark Webber out-qualifying the double world champion despite not being able to utilise his Kers system.

Lotus driver Romain Grosjean says is is "very proud" to have qualified in third, whilst his team-mate Kimi Raikkonen discusses his "bad start" to the season after being knocked out in the first part of qualifying following a miscommunication with the team that saw him cross the line without enough time remaining to start a flying lap.