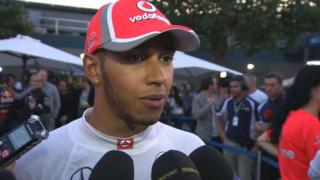 The Brit had qualified on pole after an impressive drive on Saturday, but Button beat him to the first corner and later he lost out to Sebastian Vettel in the second round of pit stops, when a safety car was deployed, to finish the race in third.

But despite his poor start he praises the "great job" by Button and the McLaren team throughout the season-opening weekend.