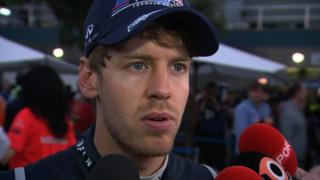 Formula 1 world champion Sebastian Vettel says splitting the McLarens on the podium was "great" after he finished second in Sunday's Australian Grand Prix.

The Red Bull driver had disappointed in qualifying by ending up sixth on the grid, but after a strong drive in the race the German managed to leapfrog Lewis Hamilton in the second round of pit stops to finish on the second step of the podium.

The race was won by Jenson Button, and Vettel admits he had "no chance" to match the Brit's pace.