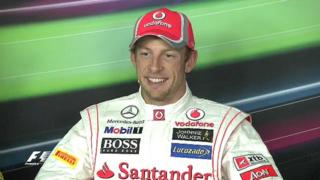 Jenson Button gives his reaction to victory in the 2012 season-opening Australian Grand Prix, alongside him are reigning world champions Sebastian Vettel, who finished second, and McLaren team-mate Lewis Hamilton in third.

Button says the result is a reflection of the hard work the team have put in over the winter period, while Vettel admits a safety car late in the race helped him pass Hamilton, but he thinks they would have had a close race nonetheless.