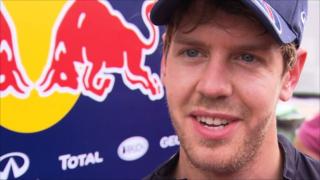 Vettel 'not happy' with car

Sebastian Vettel says he would like his Red Bull to be "more predictable" after failing to get within half a second of the top time set by Lewis Hamilton's McLaren during free practice for the Malaysian Grand Prix, complaining his tyres "seem to drop off pretty quickly".

Hamilton meanwhile is "quite happy" with the balance of his MP4-27, with team-mate Jenson Button less content with his pace on short runs.

Vettel's Red Bull team-mate Mark Webber apologises to Heikki Kovalainen after nearly colliding with the Finn's Caterham at turn one during the second session.