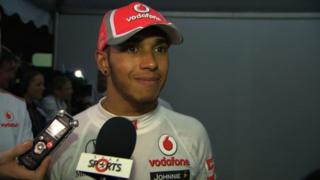 Jake Humphrey and David Coulthard look back at a disappointing Malaysian Grand Prix for McLaren, with pit-stop errors costing Lewis Hamilton any hopes of victory while Jenson Button failed to recover from a coming together with Narain Karthikeyan.

Despite problems in three pit-stops Hamilton managed to at least finish in third and he says he is happy to have found some consistency at the start of the season but is nonetheless frustrated at missing out on top spot.

While Button feels he must "laugh off" a horrendous race where "everything" went wrong and says the crash with Karthikeyan was down to the fact he could not slow his car down.

Spurs edge to victory against Fulham