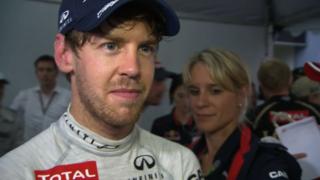 Sebastian Vettel and Christian Horner are both unhappy with Narain Karthikeyan after a collision between the HRT driver and Vettel cost the reigning double world champion a fourth placed finish at the Malaysian Grand Prix.

Vettel says he lost radio communication with his team during the race but felt that fourth would have been a good result until the "extremely frustrating" altercation with Karthikeyan.

The HRT driver feels there was no more he could do to avoid Vettel and says sometimes drivers are too aggressive whilst overtaking backmarkers.

Meanwhile, Horner is unhappy with what he calls Karthikeyan's "misjudgement" and feels Vettel may well have finished on the podium at Sepang.