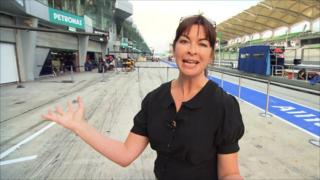 Perry is joined by Caterham's head of communications Tom Webb to discuss the pressures on drivers and teams amidst the severe humidity and occasional torrential downpour.

The Sepang International Circuit, around 60km south of Kuala Lumpur, has hosted the Malaysian Grand Prix since 1999.