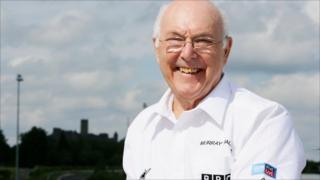 Murray Walker says he is concentrating on "getting back to form as quickly as I possibly can" after being diagnosed with cancer.

Walker tells BBC Radio 5 live's Jennie Gow a fall on holiday in which he broke his pelvis turned out to be "a blessing in disguise", as subsequent blood tests revealed he had a form of lymphatic system cancer.

The legendary broadcaster has become synonymous with Formula 1 after presenting and commentating on the sport for more than 30 years.