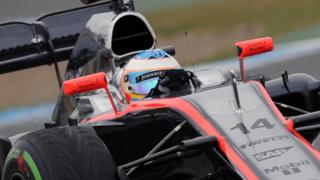 McLaren-Honda's Fernando Alonso is able to complete some meaningful laps for the first time on day three of testing in Jerez.

The Woking-based team had only managed 12 laps over the previous two days of testing, but Alonso was able to complete 32 in front of 20,000 home fans, before having to stop due to an engine water leak.

Elsewhere, Kimi Raikkonen says he had a "positive" first day in his Ferrari despite having to change a power-unit, and Red Bull's Daniel Ricciardo was happy with his running in the new RB11.