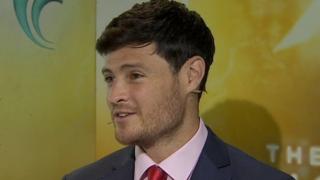 A phone call would have been nice - Clarke

Martin Clarke has revealed he was not contacted by Down manager Eamonn Burns about returning to the county's senior football squad this year.

The former All Star, who hasn't played inter-county football since 2011, spent two spells in Melbourne playing Aussie Rules with Collingwood but returned home late last year after being diagnosed with Addison's Disease.

"Without wanting my hand held or to be treated any differently, I suppose a phone call would have been nice just to see where he's at and where I'm at," Clarke said on BBC NI's 'The Championship' programme on Sunday.

"It could have potentially shifted a few things and even if it wasn't this year, then maybe the foundations for next season, to start on that. But look, it didn't happen and we have to move on and deal with that."