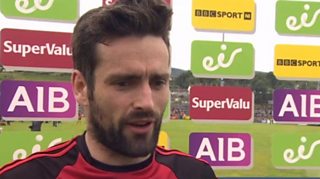 Kevin McKernan is delighted as Down earn their first victory over Armagh in Ulster SFC game since 1992.

"We dedicate that win to the Down players who fell against Armagh over the last 25 years," said McKernan after the Mourne County's 0-15 2-7 win at Pairc Esler.

"We got the right men on the ball in the second half and the guys who came on, people like Barry O'Hagan and Dave McKibbin, did brilliantly for us."