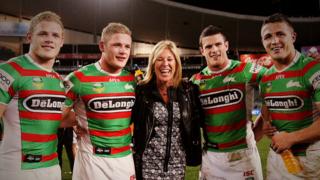 The Burgess brothers: Born to do it

For the Burgess brothers, Luke and Sam and twins George and Thomas, rugby league has always been a way of life.

Coached by their father, Mark, who was a semi-professional player, the four started on the pitches of Dewsbury Moor ARLFC before establishing themselves in the Super League with Bradford and Leeds.

Mark died in 2007 after a battle with Motor Neurone Disease. Gradually over the next five years, all four brothers - and mother Julie - moved to Australia, where they now play for actor Russell Crowe's South Sydney Rabbitohs in the NRL.

In October, three of the brothers realised a life's dream by being named in England's squad for the Rugby League World Cup, with only eldest brother Luke missing out.

Their love of the game remains as strong as ever, something the brothers put down in part to the early experiences at their first club, Dewsbury Moor.

If you would like to get involved in rugby league go to our pages or the RFL website Extraordinary Rugby League.