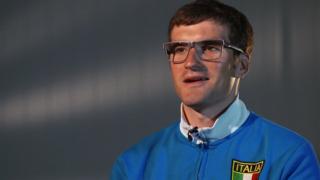 Bellis back after 'miracle' recovery

Cyclist Jonny Bellis - who competed for Great Britain at the 2008 Olympics - tells Inspire: The Olympic Journey about his 'miracle' recovery after almost being killed in a scooter crash in Italy in 2009. Bellis was in a coma for a month and his parents were told that he would be paralysed from the neck down.

After years out, Bellis has returned to the sport and is gearing up to represent the Isle of Man in track cycling at this summer's Commonwealth Games in Glasgow.