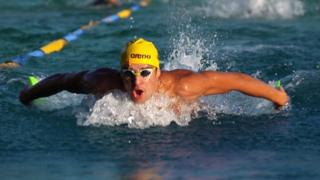 Olympic, World and Commonwealth champion Chad Le Clos meets the BBC's Matthew Pinsent and gives him an in-depth insight into his training and life ahead of this summer's Commonwealth Games in Glasgow.

The South African swimmer announced himself on the world stage at the 2012 London Olympics when he stormed to victory in in the 200m butterfly - beating American Michael Phelps - and shot to fame thanks to his dad Bert Le Clos's emotional reaction live on BBC television.