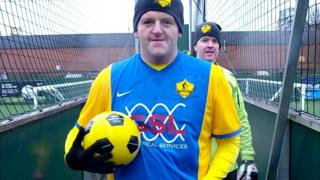 Meet OAP United - not only bidding for glory in the first round of the FA People's Cup, but also itching to show the sons that they coach and watch every Saturday that they too have a bit of talent when it comes to kicking a ball.

"We're just a bunch of frustrated Dads on the sidelines!" they laugh.

Some hadn't played in years, and their 5-a-side preparation matches ended with defeat - and stiff joints. However, OAP United should have something to offer in the male veterans category: they're not actually old age pensioners at all, just busy men in their late 30s taking a break from juggling families and jobs.

Catch up on the action from the first round of the FA People's Cup.