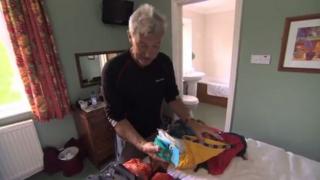 The Pennine Way: An introduction from Paul Rose

Paul and the team from BBC Yorkshire pulled on their hiking boots last summer to explore the 268 mile trail, which was officially opened in 1965. It stretches from Edale in the Derbyshire Peak District to Kirk Yetholm on the Scottish border.

From the highest pub in England to the Roman excavations at Hadrian's Wall and the red squirrels of Northumberland to the blustery Helm Wind of Cumbria, Paul Rose discovers the wildlife, geographical features and people that make the Pennine Way so distinctive and challenging.

In this video Paul gives us a taste of what is to come throughout the series.

Find out more about the series and get some tips on how to walk the Pennine Way.