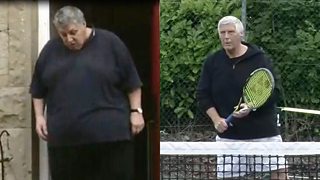 When Tony Costa reached the age of 64, he weighed 26-and-a-half stone, having struggled to deal with the death of his five-month-old son.

He lost some weight through a diet club but had "plateaued" and was "losing interest" and needed something to keep him going. "Tennis came at the right time," Tony says four years later.

This year Tony's son would've been 20 years old and he and his wife Caroline held a memorial tennis match at a local club.

"We shone some light on some darkness - and we have tennis to thank for that," he added.

If you want to find out how to get into tennis, read the Get Inspired guide.