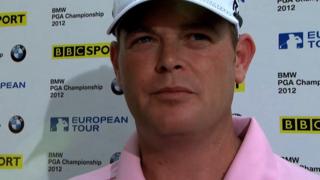 Drysdale proud of fantastic round

David Drysdale reflects on a "fantastic" first round, while joint overnight leader Peter Lawrie says he played "lovely golf" after finishing six under after the first round of the BMW PGA Championship.

Defending champion and world number two Luke Donald, who shot 68, hopes his good record at Wentworth can continue and a content Lee Westwood says his opening 70 was his best start at the tournament.