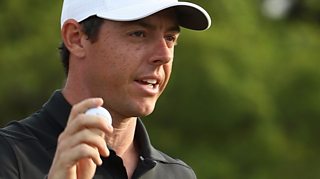 Patience pays off for McIlroy in first round

Four-time major winner Rory McIlroy says patience was a key factor in his opening round of three-under-par 69 at the Masters in Augusta.

The Northern Irishman lies in a tie for fourth position, three shots behind leader Jordan Spieth as he continues his bid for a career Grand Slam of major titles.

The world number seven explained to BBC Sport NI's Stephen Watson the importance of getting off to a good start in the championship and his hopes that he can carry that momentum into the second round.