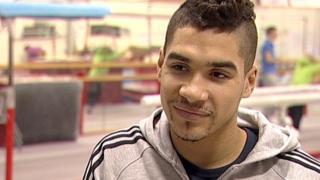 Gymnast Louis Smith says winning a bronze medal at the 2008 Beijing Olympics was "unbelievable" and says life has not been the same since.

The 22-year-old talks to BBC Sport's Mike Bushell about the sacrifices he has to make and the strain that training for the pommel horse puts on his body.

Smith also says that he finds it hard to get excited about the 2012 London Games, but admits facing his dream head on is "nerve wracking".