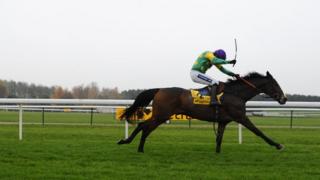 With this year's Cheltenham Gold Cup taking place on Friday, BBC Radio 5 live's horse racing team take a look at one of its most famous icons - Kauto Star - and the team behind him.

Trained by Paul Nicholls, the French-bred horse is bidding for a fairytale triumph in the twilight of his career.