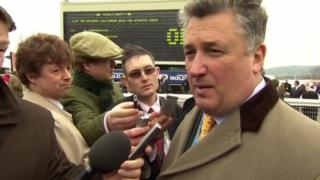 Kauto Star's future yet to be decided

Trainer Paul Nicholls admits Kauto Star is "unlikely to run in a Gold Cup again" after the two-time winner was pulled up during the race at Cheltenham Festival, but rules out making an immediate decision on the horse's future.

Kauto Star's participation in the Gold Cup was in jeopardy following a schooling fall a fortnight ago and Nicholls refuses to comment on whether the horse should be retired, insisting that he is "100%" and has simply "tweaked" a muscle.

Fulham's McDonald to have kidney transplant