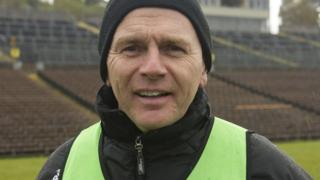 Jim McCorry says there will be no fear factor in his Kilcoo team heading into Sunday's Ulster Club Final against Crossmaglen.

"There is respect for what Crossmaglen have achieved but when it comes three o'clock on Sunday that respect goes out the window," said the Kilcoo manager.

McCorry managed Armagh to the National League Final in 1995 and also guided Mayobridge to the 2001 provincial club final where they were narrowly beaten by Ballinderry.