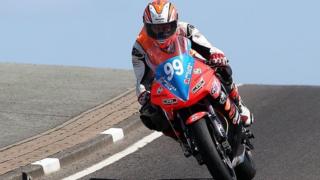 Jeremy McWilliams expresses his delight after collecting the Hall of Fame accolade at the Irish Motorcyclist of the Year Awards in Belfast.

McWilliams enjoyed a distinguished career at grand prix level in the 250cc and 500cc class.

The Glengormley man finished on the podium on his first appearance at the North West 200 in 2012 and is considering making a return visit this year.