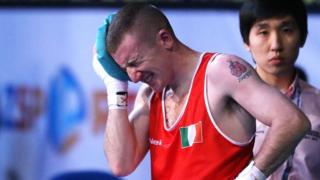 All three lost on unanimous decisions with Barnes bemoaning the lack of headguards under the new regulations after saying that he sustained blurred vision in the first round of his defeat.

Donegal man Jason Quigley and Joe Ward are both guaranteed at least bronze medals after progressing to the semi-finals in their weights.