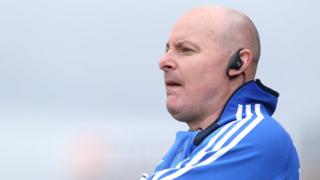 Monaghan boss Malachy O'Rourke praises his team after a hammering Down 2-22 to 0-9 in the Ulster SFC quarter-final at Clones.

The champions led by just three points at the break but stormed clear in the second half with goals coming from Kieran Hughes and Owen Duffy.

Monaghan will take on Donegal or Fermanagh in the semi-finals.