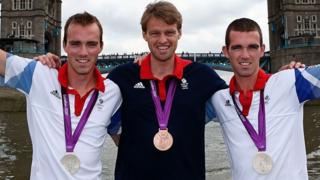 Coleraine rowers Alan Campbell, Richard Chambers and Peter Chambers talk of their hopes of producing medal-winning performances at the World Championships at Aiguebelette in France.

Campbell returns to the Great Britain team to compete in the single sculls event after being left out of the squad for last year's championships.

Richard Chambers is part of the GB lightweight double sculls team, while his brother Peter is a member of the lightweight four.