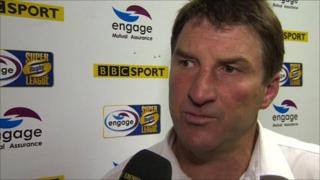 Warrington coach Tony Smith concedes that his side lost to the better team on the night.

Leeds Rhinos are the first team to finish fifth in the Super League and make the Grand Final. They beat the Wolves 26-24 thanks to a penalty from captain Kevin Sinfield with just two minutes remaining.

The former Leeds coach laments unusual errors from his team and is disappointed Warrington will not be in the final having won the league leaders shield.