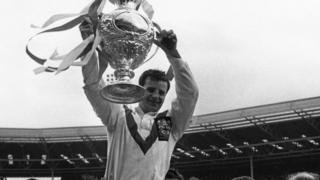 Journalist Tony Hannan discusses the talents of Alex Murphy, the only player to captain three different sides to victory in the Challenge Cup.

Murphy is one of six nominees to be immortalised with a statue at Wembley Stadium, after collecting 27 caps for Great Britain and leading Leigh to a shock win over Leeds in 1971.