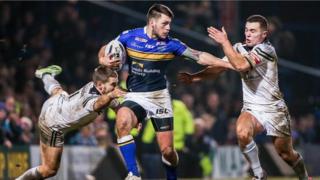 After a crisp Leeds move through the hands, Briscoe receives the ball in his own half before breaking two Viking tackles and crossing the line with one of Rhinos' tries in the match as they continued their 100% Super League record in 2015.