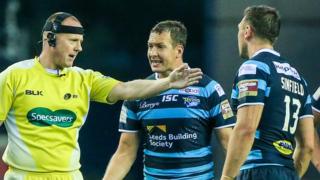 Who are the cheekiest Super League stars?

It is the turn of rugby league referees to take on #lasttackle, and they lift the lid on who the cheekiest players are that they have encountered in their Super League and Championships careers.

Phil Bentham, Richard Silverwood and Ben Thaler are among the current match officials to answer the questions, along with referees' boss Steve Ganson.

You can see the full #lasttackle segment on the BBC Super League Show on BBC One in the north at 00:00 BST on Tuesday 7 June, or in the nationwide repeat at 13:00 BST the same day.

The show is also available on the iPlayer all week, while there are bonus #lasttackle answers on the SLS2 web show.