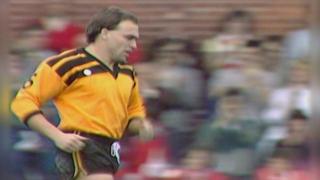 When Kear was a Tiger - with hair

This week's Super League Show rewind goes back to 1984, when Hull KR were triumphant in the Premiership final against Castleford Tigers, and Wales and Batley coach John Kear, a regular studio guest, sported a fine crop of hair.

Kear scored a try at Elland Road, but Rovers, with imports such as Gary Prohm and John Dorahy plus Great Britain stars such as David Hall and George Fairbairn ran out winners, to complete a Championship/Premiership double.

For more Super League Show Rewind moments, tune in to BBC One on Monday nights in the north of England, followed by a nationwide repeat on Tuesday lunchtimes on BBC Two.

The show is also available on the iPlayer all week.