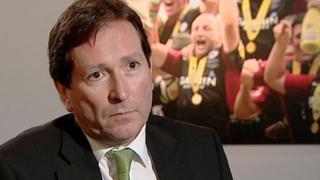 Premiership Rugby chief executive Mark McCafferty says he would "love to put on a world club event" that pitches the best teams in the northern and southern hemispheres against each other.

The 2000th Premiership match takes place on Sunday when Bath host Saracens and, speaking to BBC Sport's Dan Roan, McCafferty says they are continually looking at ways to develop the game and this concept could come to fruition "within the next three to five years".

McCafferty also says that club rugby has aided the recovery of rugby in this country in the wake of England's poor World Cup campaign.