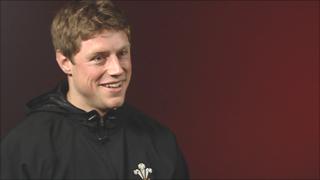 Priestland on Wales and 'sexy' award

Wales fly-half Rhys Priestland looks ahead to Saturday's Six Nations match with England at Twickenham, and says he "respects" rather than fears the opposition.

The 25-year-old plays down the pressure of wearing the coveted number 10 jersey, saying he is just "borrowing" it, and jokes that his team-mates each believe their position is the most important.

Priestland also says he's been getting stick from his team-mates after being named "the sexiest man in Wales".