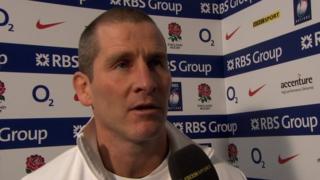 Lancaster calls on England to regroup

Head coach Stuart Lancaster urges England to "regroup and learn lessons" from their 19-12 defeat by Wales in the Six Nations at Twickenham.

Lancaster says he will "take positives" from the game and that his players should feel "proud" of their performance.

He adds that he is "disappointed" England missed out on a late try when David Strettle just failed to get the ball down over the line and TV match official and referee Steve Walsh ruled no try.