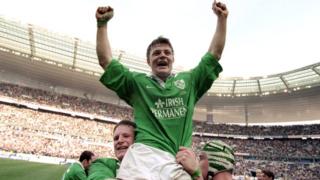 The then 21-year-old centre touched down three times in 2000 to help Ireland to their first win in Paris since 1972 and usher in a new age of Irish rugby success.

The sides meet again on Saturday 15 March in France with both teams still having hopes of winning this year's competition.