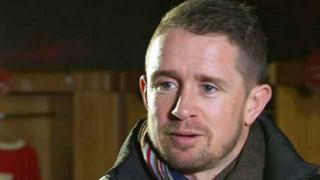 Legendary Wales wing Shane Williams says England face the 'shock of their lives' in the Six Nations against Wales in Cardiff as both teams battle for the 2013 title.

Williams says Wales players such as Mike Phillips and Alun Wyn Jones will aim to get under the skins of opponents such as Chris Ashton and Owen Farrell.

But Williams also warns Wales they must concentrate on trying to win the game, not securing a points margin that would seal the Six Nations title.