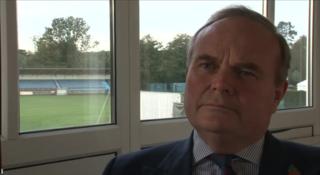 London Welsh chairman Bleddyn Phillips tells BBC Oxford the club are looking at ways to better connect with their new fan base.

Welsh moved to Oxford from Richmond last year after reaching the Premiership and stayed following relegation, but crowds have been poor.

Phillips says the club may consider rebranding but is also eager not to eradicate 130 years of tradition.