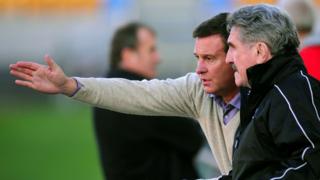 Welsh Rugby Union chief executive Roger Lewis said it was "very big indeed" of elected board member Gerald Davies to admit his responsibility for some of the reasons behind the calling of Sunday's Extraordinary General Meeting.

Lewis said Davies "consistently" voted for lower-leagues structure changes and that was "out of tune and out of step" with the membership.

The WRU board overwhelmingly survived a vote of no confidence in Port Talbot, where it was agreed clubs would be balloted on proposed league structure changes.

Former Wales and British and Irish Lions wing Davies said at the meeting the WRU was "not held in high regard".

Lewis, speaking to BBC Radio Wales' Oliver Hides the day after the meeting, said: "Things have to evolve and we will continue to sharpen the saw in the best interests of the game in Wales."